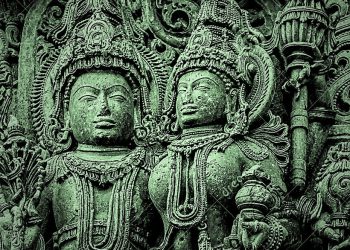 The Indian subcontinent is a vast geographic region that includes the current states of India, Pakistan, Bangladesh, Nepal and Bhutan and has almost 1.7 billion inhabitants. This area is characterized by having an idiosyncratic culture that dates back thousands of years. Among its most outstanding manifestations is that of sculpture, almost all of it made of stone, metal, or terracotta, due to the poor conservation of organic materials due to the local climate. Although the first sculptural manifestations, originating from the Indus Valley civilization, date back thousands of years before Christ, it was during the development of Hinduism (between 300 BC and 500 AD), when the representations played an important role to figure to the new divinities. The sculpture of this vast region is difficult to classify due to the existence of different eras and currents, however the sinuous and voluptuous forms in figurative sculpture stand out, as well as the integration of sculpture and architecture in the temples, whose walls are frequently painted in bright and vivid colors.